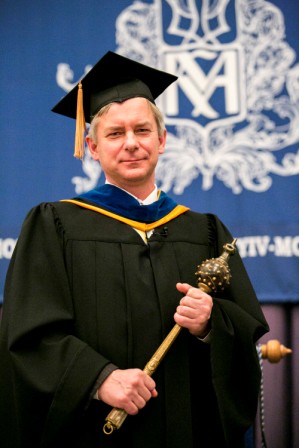 March 17, 2015 in the Kyiv – Mohyla Academy (Skovorody Str. 2) will be round table discussion with participation of Latvian Researcher, Executive director of the Centre for East European Policy Studies Mr. Andis Kudors about „History as a weapon in Russian foreign policy".

The event takes place within the programme of the Latvian Presidency of the Council of the EU and is jointly organized by Embassy of the Republic of Latvia in Ukraine, Centre for the Study of the Liberation Movement and Institute of National Memory.

From the thesis of A.Kudors:

a has not been able to examine and condemn totalitarian past the Soviet era, the process of de-Sovietization is not occurred in full extent. On the contrary – the attempts of condemnation of communism are perceived as attempts to turn against Russia as a country.

Russia's specific vision of their own and other countries' historical events is actively distributed across the borders of Russia – towards the former Soviet republics. Propaganda of the specific interpretation of the history is used for the "Russian world" consolidating process. But since the occupation and annexation of the Crimea expectations have arisen among significant part of the population of Russia that it is time and possibility to restore the rest of the "historical territory" of the Russian Empire.

The most significant differences between Russia, on the one hand,and the Baltic states, Ukraine and other Eastern European countries, on the other hand, are seen in evaluation of the events of World War II.

Issues of history are used as one of the instruments of the Russian public diplomacy in support of Russia's goals to dominate the wider region– the former territory of the Soviet Union...."

Andis Kudors has graduated from Latvian University and has Master degree in political science. Since 2006 is a researcher and Executive director of the Centre for East European Policy Studies. He also is a Visiting scholar at the Kennan Institute, Woodrow Wilson Center. Leaded EU Neighborhood Policy working group.

He has written many scientific publications and books, among them: "Memory and Identity of Ethnic Russians in Latvia", "Russian Soft Power and Non-Military Influence: The View from Latvia", "Russian information campaign against Ukraine", "Latvia between the Centers of Gravitation of Soft Power – the USA and Russia".