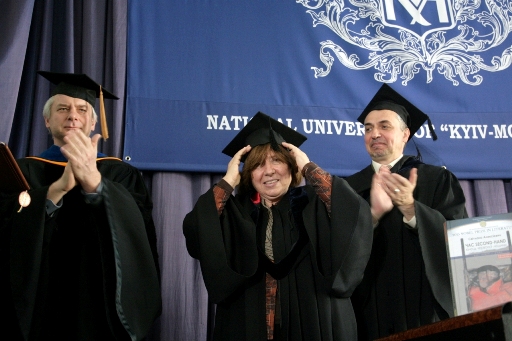 During this meeting Svetlana Alexievich was inaugurated as an Honorary Doctor of Kyiv Mohyla Academy. Such decision was approved by the NaUKMA Academic Council on February 11, 2016.

During her Nobel speech, she said: "I’m often called the writer of disasters, but it's not true, I'm always looking for the words of love. Hatred will not save us. Only love."

Her first published book, "War’s Unwomanly Face", was both a sensational collection of the Second World War real memories and the verdict to the official Soviet version of "historical truth" about events of those times. Her second book, "Zinc boys", dedicated to the Soviet invasion of Afghanistan, was met with the same feedback - great public fascination and angry, nervous reaction of the Soviet government. Her latest book is entitled "Second-Hand Time: The End of the Red Man" is a unique literary study of "Soviet man» (homo soveticus), which represents not only artistic but also historical and anthropological value.