Home → News → On being tired from being conscientious. Appeal to the European community

On being tired from being conscientious. Appeal to the European community 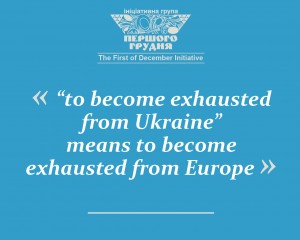 Prior to almost every great historical change in Europe there was a period of exhaustion. A tiredness of being conscientious.  This rule was especially profound in the 20th century.  This tragic pattern takes away the right to be silent now, when that uncertainty and insecurity once again dominate in Europe.

The optimistic prospects for the European Union are surrounded by clouds foretelling of economic difficulties and social anxiety.  Hundreds of thousands refugees have appeared.  Terrorism has undermined the peace of the previously safest locations. For many collective issues have become annoying irritants.

The exhaustion from the incessant stream of threats could have been predicted.  But now that exhaustion has become a danger:  it provokes a moral alienation, allowing us to compromise with truthfulness.  That is why Europe is being overwhelmed by populism with its very simple responses to complex issues.  This is why xenophobia and chauvinism emerge as a defense mechanism against foreigners.  This is why it becomes easier to hide from problems, to avoid the additional responsibilities, to look inward.  This turns to self-isolation.

Russia's war against Ukraine, the occupation of the Crimea, the armed intervention in the Donbas, tens of thousands of victims, 1,500,000 internally displaced refugees belong to those problems from which an European philistine wants to hide behind the screen of exhaustion. Daily Russian diversions, provocations and blackmail no longer appall a portion of the European polity. They have become accustomed to this war. The routine dulls empathy; indifference levels the victim and the aggressor.

But Russia's war against Ukraine continues. The aggression continues.

At the same time in Ukraine there is a dramatic battle of the new against the old – and this battle does not guarantee a quick victory, since this kind of victory has not immediately occurred in any European country. The Russia's war in Ukraine continues and exhausts slowly, peopleare being killed each single day. For this reason the European exhaustion is the aggressor's strongest ally, who with arms in hand violates world order.

"To become exhausted from Ukraine" and to ignore Russia's crimes in Ukraine, and return to its "business as usual" with Russia are being considered now as an offensively realistic option again. But this is a horrifying self-illusion and self-deception. Life in Europe has changed. One of the main reasons is the attempt of foreign aggression to inject onto the very values, sense and style of life in Europe. No attempt to hide in one's one home will return the previous comfort.

At a time when a united Europe is yet trying to find its fulcrum, with this appeal we, the representatives of various nations, call on European politicians and European community to find the intellectual and moral strength to prevent the "exhaustion from Ukraine" and resist temptations to mollify the Russian aggressor. This illness will lead to one end:  an exhaustion from oneself, from one's own values, from the very ideals of Europe.

We call on all thinking people of our joint European community to show solidarity and to find the strength to stand against the threats of self-isolation, xenophobia and populism, which will dismember Europe.

The sole direction which can save Europe from the errors and cowardice is the ethic choice: an adherence to the values which created Europe's civilization. This ethical choice should envisage the values of freedom and the rule of law above the amoral comprise of "realpolitik", the victory of collective solidarity over self-isolation, the vision of a United Europe over local interests and ambitions.

"The exhaustion from Ukraine" is a metaphor. It also applies to the rest of Europe, which, despite its geographical proximity, remains unknown in much of the nearsighted West. A great deal depends from the countries of this region, from accountability and effectiveness of their leaderships and the maturity of their societies. But Europe needs to make an effort to discover and understand these "forgotten" European nations.

The ethical choice means including Ukraine in the mental map of Europe.  This inclusivity applies also to Georgia, Moldova and to all countries of Eastern Europe, whose presence in the boundaries of the European Union should once and for all time become a political and spiritual reality.

Europe cannot hide from itself.

Let's not be afraid of the future.  Let's create it together.

Vytautas Landsbergis, the first Head of the renewed state of Lithuania

Aleksander Kwasniewski, President of the Republic of Poland (1995-2005), Honorary Doctor of the National University of Kyiv-Mohyla Academy

Petras Vaitiekūnas, Minister for Foreign Affairs of the Republic of Lithuania (2006-2008)

Audronius Azubalis, Minister for Foreign Affairs of the Lithuanian Republic (2010-2012)

Antanas Valionis, Minister for Foreign Affairs of the Lithuanian Republic (2000-2001)

Uffe Elleman-Jensen, Minister for Foreign Affairs of the Kingdom of Denmark (1982-1993)

Vyacheslav Briukhovetsky, Honorary President of the National University of Kyiv-Mohyla Academy, member of "The First of December" Initiative Group

Bohdan Hawrylyshyn, member of the Club of Rome, founding member of the World Economic Forum in Davos, Honorary Professor of the National University of Kyiv-Mohyla Academy, member of "The First of December" Initiative Group

Myroslav Popovych, philosopher, director of the Ukraine's Skovoroda Institute of Philosophy, Honorary Professor of the National University of Kyiv-Mohyla Academy, member of Ukraine's National Academy of Sciences, member of "The First of December" Initiative Group

Ihor Yukhnovskyi, the first Leader of the democratic People's Rada in the Parliament of Ukraine (1990 – 1994), scientist, member of Ukraine's National Academy of Sciences, member of "The First of December" Initiative Group

Ivan Vasyunyk, Vice Prime Minister of Ukraine (2007-2010), chief of the secretariat of "The First of December" Initiative Group

Josyf Zisels, former dissident, head of the Association of Jewish Organizations and Communities in Ukraine

Ramūnas Bogdanas, former advisor to Mr. Vytautas Landsbergis as the first head of state of Lithuania