Academic year at Kyiv-Mohyla Academy traditionally starts with two lectures; one of them is dedicated to moral guidelines. This year Mohylianka had unusual lecturer – representative of Islamic community mufti at Religious Administration of Muslims of Ukraine "Ummah" Said Ismahilov. 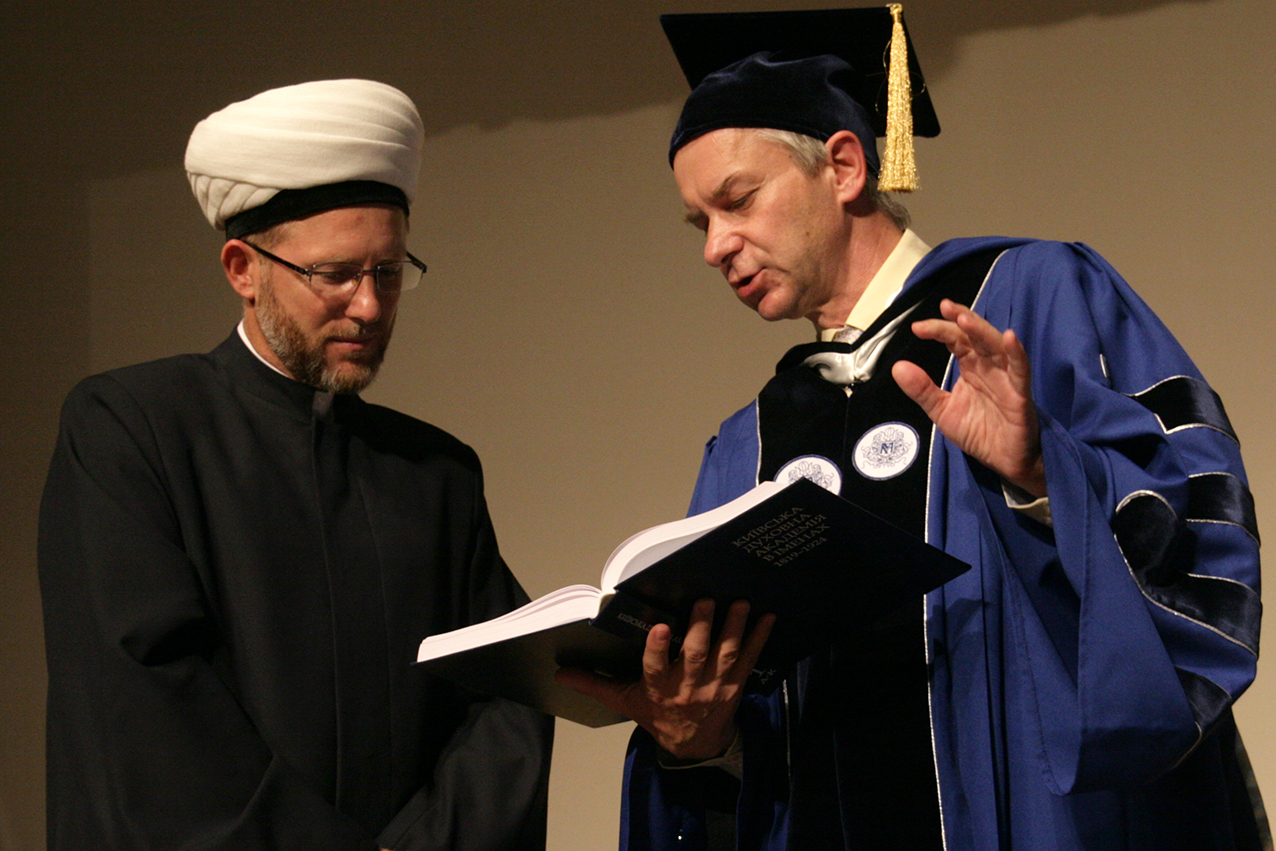 The lecture started from the history of Islam development in Ukraine. According to Sheikh Said, Islam was as traditional religion for the Ukrainian territories as Christianity – first facts of Muslim community’s presence are dated VIII-IX century. Moreover, Ukraine is one of the few countries, where representatives of different confessions have been living in peace. Constant cross-cultural exchange had formed tolerance and respect towards other nations and religions.

Nowadays approximately one million people profess Islam in Ukraine. They are habitants of Crimea or megapolises, such as Kyiv, Kharkiv, and Odessa. This number has its historical reasons: representation of Islamic community in Ukraine had been suppressed for a long time. This phenomenon has become a result of the deportation of the Crimean Tatars in 1944 during the Stalin’s regime. Until the independence of Ukraine the official Islamic community could barely exist.

Sheikh Said Ismahilov mentioned the influence of nowadays and near past events – the Orange Revolution, Revolution of Dignity, Crimea’s occupation, and Russian aggression against Ukraine – all of them contribute to formation of the political nation. “Political nation consists not only of ethnical Ukrainians, but also of those, who, in spite of ethnical origin, identifies themselves with Ukraine. Respect for languages, cultures, and customs of different ethnical communities in Ukraine forms the Ukrainian identity of those, who will be the future of our country”.

Christians, Muslims, Jews as representatives of Abrahamic religions share common moral values. First of all they share the freedom of choice and the responsibility it evokes. Another one is accumulation of the experience and creative thought that satisfies spiritual needs. And the last one is the deeds and their moral and ethical nature.

During the lecture were also outlined some views on religious diversity and the woman’s role:

“Historical experience demonstrates us particular scheme: when people want to combine two phenomena it often causes the existence of three different. For instance, in Ukraine the mixture of Catholicism and Orthodoxy gave Greek Catholic Church. Maybe it is not necessary make people to unit and cause pressure. Let the thousands flowers blow. Let the people profess what they want to in respect towards the others. Everything joined under pressure cannot lead to real cohesion”.

“That is the myth exists that Islamic women are humiliated. In the reality we have to divide Islam from the local traditions. It frequently happens that local pre-Islamic traditions have stronger influence than Islamic devotional duties in Koran. This situation can be exemplified by Afghanistan or Somali less prosperous and developed countries. They have low standard of life and education. Things that happened there often do not correspond with Islamic values, for example, to forbid woman to get an education and to vote. Some of the Islamic countries had women as the ministers, prime-ministers or social activists. Turkey and Egypt demonstrate us an opposite example, there women take an active part in social life. That is why humiliation is connected with local tradition mere that with religion”.

Photoreport of the lecture you may find here