On February 4, 2022, students of the National University of Kyiv-Mohyla Academy organized a peaceful protest in front of the Cabinet of Ministers of Ukraine with a call to stop the arbitrary decision of the Minister of Education that negated the results of the election of president of the university, and to demand that the Ministry proceed with the official agreement with Professor Serhiy Kvit as the elected new president.

The students and friends from other universities demanded the resignation of Education Minister Serhiy Shkarlet, and the reinstatement of autonomy and freedom of choice of Ukrainian universities.

Today's action is a defense of autonomy of the Kyiv-Mohyla Academy, and an example for others”, commented Serhiy Kvit.

“The protest action took place as part of an indefinite strike announced by Kyiv-Mohyla students. … A meeting with the Prime Minister of Ukraine took place last night, as a result of which the Ministry of Education and Science revoked its order for yet another election and validated the election … There is mutual agreement that only the Kyiv-Mohyla community has the right to decide who should be the next president.”

Serhiy Firak, Editor-in-Chief of “Student News” said, "It was very important for us to go to the Cabinet today and demonstrate our position on the situation around the elections……”.

Anastasia Kryshtanovych commented, “I am happy that, despite the bitter cold, we were able to gather a large crowd as a united front in defense of autonomy in education not only for Kyiv-Mohyla Academy, but for all higher education in Ukraine”.

Mykhailo Postnikov added that, “It was rewarding to see so many people from our own university but also from other institutions of higher education. There was a feeling of unity. I never expected that the resolution of this issue would come so quickly.  As long as we are together – we will prevail.” 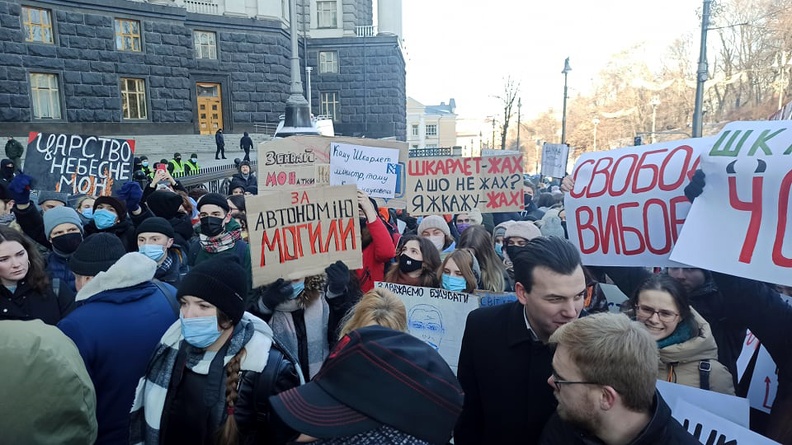