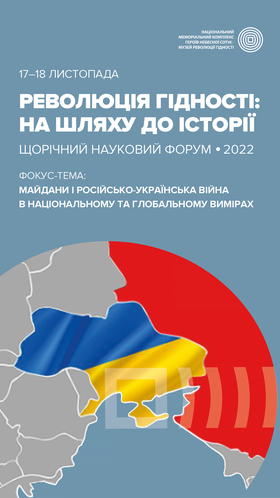 Forum topic: “Maidans and the Russian-Ukrainian war in national and global dimensions”.

Maidan, as a way of defending political rights and freedoms, is a significant phenomenon in Ukrainian history. At the end of XX — at the beginning of XXI century, it has become an important part of the Ukrainian socio-political movement, influencing geopolitical processes.

The Russian Federation saw the mass protests, where Ukrainian citizens defended their democratic principles, independence, and right to choose, as defiance. Russia viewed the Maidans as a threat to the Kremlin regime and an obstacle to fulfilling their ambitions. During its independence, Ukraine was able to form a civil society. At the same time, Russians allowed their authorities to revive a dictatorship, posing a threat to the whole democratic world today.

Maidan's victory in 2014 was a geopolitical failure for the Kremlin regime. In response, they launched a hybrid war against our state. They occupied the Autonomous Republic of Crimea and parts of the Donetsk and Luhansk regions. Eight years later, on February 24, 2022, the Russian Federation started a conquest war in the heart of Europe, in Ukraine.

Since the beginning of a full-scale Russian invasion, Ukraine has transformed into one big Maidan. Our country is ready to defend its democratic freedoms, independence, and territorial integrity to the last Ukrainian.

Current events prove the importance of an in-depth study of the Maidans, from the Revolution on Granite to the Revolution of Dignity. Russia desires to keep Ukraine under its influence, destroy opponents of the “union” with Moscow, arrange a genocide of the Ukrainian people. For several decades, Russians used various methods to suppress Ukrainian resistance and civilizational choice. Their “weapons” varied from cultural expansion and information war to full-scale military aggression.

Two years ago, the National Museum of the Revolution of Dignity held an Academic Forum on the topic of Maidan in the context of the global protest movement of the late XX — early XXI century. During the Russia's war against Ukraine, it is crucial to research the struggle of Ukrainians for their freedom and independence. Including struggles on Maidan.

What was the ratio of external and internal factors affecting the course and consequences of the Ukrainian Maidans? Should we consider the modern-day Maidans as stages of Ukraine's struggle for independence in line with the current war? How does the full-scale Russian invasion affect the creation of academic discourse related to the topic of Ukrainian Maidans and national liberation struggles in general?

These and other questions will be discussed during the fourth Academic Forum. It will be devoted to the role of Maidan as a socio-political phenomenon in the context of a full-scale Russian invasion of Ukraine.

The purpose of this year's Forum is to initiate a discussion about conceptual approaches to the Maidan phenomenon's study among Ukrainian and foreign academics; to disseminate reliable information about the causes and consequences of protest movements in the context of the Russian-Ukrainian war.

Historians, political scientists, sociologists, philosophers, lawyers, museum professionals, cultural experts, communication specialists and other academics of social and humanitarian sciences, focused on protest movements and the Maidan phenomenon, particularly in the context of the current Russian-Ukrainian war, are invited to participate in the Academic Forum.

Participation in the forum is free. It is planned to prepare and publish a collection of scientific works based on the materials of the forum. Publication is free.

Registration for the Forum: https://forms.gle/FGeLcWev2rZNbuyt9

More about the forum on the website of the National Museum of the Revolution of Dignity.